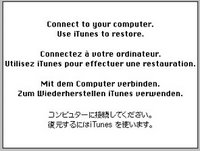 I had a pretty, black, 60GB ipod “video” until this morning. As with any disk failure, the worst part isn’t losing the device, it’s losing the data. I was plugging it in so I could back up all the work I did last weekend, but spent most of the day re-doing it from an earlier backup since everything was lost.

I think I have a problem with my mac Mini since a number of USB devices have started working erratically shortly after being plugged into that computer. It’s making me think that the recent trouble I had with the Sandisk Cruzer might have been caused by a spike or something (though I’m not prepared to apologize for maligning Sandisk yet).