Knock on wood: I’ve never caused a car accident.  But I’ve been in several.  Each accident happened when my car was stationary and I was miles away from it.

On 5/26/05, a car I own was the victim of a truck accident on the block. It was a hit and run on my ’96 Jetta. A neighbor left a note with the license number of the U-Haul that hit the car, but the company refused to pay because nobody would step forward as a witness.

On 6/7/07 a distributor’s truck destroyed a Toyota, which was then slammed into the front end of my ’01 TDI damaging the wheels, quarter panels, and steering mechanisms (the car needed to be towed, wouldn’t drive). All told four cars were damaged in the accident. The truck driver was fine.

Update June 2011: Another hit and run.  Again on the 2001 TDI. The left rear taillight was destroyed and the bumper beat up a bit. I replaced the taillight with some help from our friends at the Parts Place in Auburn Hills, MI.

Update November 2012: This time a tree fell on my 2001 TDI while parked down the block. Last year we counted 359 wee visitors to our stoop during Halloween evening.  This year we didn’t bother (there were too many to count… it was, quite literally, overwhelming).

However, we did give away 17 pounds of candy this year (up from 14 last year) plus a butt-load of small decks of playing cards, which M got at Costco.  Given the ratio of candy:kids that we had last year plus the addition of the non-candy treats, I calculate that we had upwards of 500 trick-or-treaters at the door.

2010 highlight:  a neighbor down the street was offering candy or brussels sprouts.  I actually saw a few kids taking the latter, though I hope they didn’t eat them.

There are a number of blogging solutions at Columbia (CUIT and Pressible both offer personal blogs and CCNMTL offers course blogs via EdBlogs). One interesting use is to have students’ personal blogs (like this one) feed into several course blogs via a tag. As an example, I’m feeding this post into this fictitious Music Humanities site via the tag “humaw1123”.

Now, to satisfy the other element in this post’s title, since I don’t have much interesting to say about classical music, I’ll simply mention a CD that I’ve liked for a long time: Schubert: Impromptus, Moments Musicaux perfromed by Ethella Chuprik. This CD was originally released on Naxos in 1995 (?) and if it were vinyl I would have worn it out. If you’re on Columbia’s campus, please feel free to give it a listen. I live in Park Slope. Park Slope loves Halloween. In the past I made off-handed comments to friends and colleagues that “a lot” of trick-or-treaters come to our stoop every year (I’d claim wild numbers like 200+ kids). This year, we decided to be scientific about it and collect some real data.

There’s not much to report, really, but with trusty cadre of helpers/candy-passers/pumpkin-carvers on the front stoop along with an ample supply of beverages and snacks to keep them all happy we set about our business. I downloaded “tally counter” to my iPod touch and KW (and TB) brought a combined total of over 14 pounds of chocolatey, “fun-sized” goodness. (Averaging ~1/2 oz per bar, that adds up to 450 pieces of candy). A not insignificant portion of that candy was eaten by the aforementioned “helpers”, but most of it went to the kids. the grand total: 359 (that’s three-hundred-and-fifty-nine!) individual costume-clad kids graced our front stoop. Tom Beeby would be proud (not of the kids, of the accuracy of this report!).

To get an idea of the scale of Halloween in PS, check out this photo by hijirik near the corner.

Zoe Kazan is featured in Modern Luxury’s December 2008 Miami magazine (p. 76). The shots for the article were taken in our Brooklyn backyard. In this photo Zoe is luxuriating in the hammock that SB got us during her stint in Amsterdam. There were a number of other (more interesting?) shots, but this is a pretty darn good one. This is the first in what will, hopefully, be a long string of press events for the backyard! 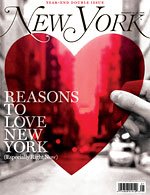 New York Magazine’s Reasons to Love New York 2008 edition is on newsstands. I’d like to point out two sibling-in-law-related highlights. First, LH has a byline in her Intelligencer article, “Amid Downturn, an Uptick in Doing Good“. Second, CN is featured as the 32nd Reason to Love New York.

More photos of Ale are here: 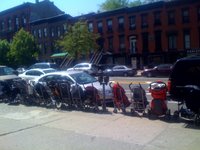 There’s a lot to love and hate about Park Slope. An illustrative example: there’s the Tea Lounge, but there’s also Café Regular. Either PS Tea Lounge is a hateful and ratty hole. The baristas are mean in a mean way and the coffee is mean too (I stopped going there the second time they steamed old coffee back to life and served it to me.) At Regular, Martin is mean, but in a good way (once, when asked by a “Slope” dad if the cigarettes in the packs are for sale, I heard him answer menacingly, “nah, I give them away… to children,” as he looked down at the boy.)

Gawker had an article (tagged “stroller derby” which is my description of 7th Ave on any given sunny Saturday) about the Times’ Sunday Styles article. Good readin’.

Full disclosure: I live in Park Slope. I am a member of the Food Co-op. My wife is pregnant. In fact, she took this picture outside of the park slope YMCA while attending a prenatal yoga class. Check out all those strollers! Congratulations and be prosperous! We went to the Chinese New Year celebration and parade in Chinatown this weekend. The weather was blustery and we missed the Verizon float (damn!), but everyone was in good spirits and the confetti was flying. More pics here.