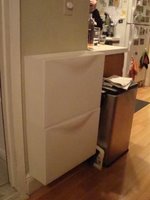 M and I have been looking for a small recycle bin solution for some time.  Most were expensive and huge so we stuck with a kitty litter pail and cardboard box. Finally, we decided to try these Ikea Trones shoe bins and they worked out really well.  They’re unobtrusive, but have enough room to meet our needs.

Tonight I did a much simpler version of this to turn a regular dim incandescent bulb into a three-led super-light. It did take some soldering, but the job was straight-forward (no “electrical” work was required).

UPDATE: This doesn’t work. Some “electrical” work is required. The bulb works for a mile or so, but dims and eventually goes out. I’m going back to incandescent.

I was putting up the christmas tree this evening and (surprise) all of last year’s light strands worked. However, when I string the lights each year, I realize that I have to continually readjust them until M approves of the light distribution. I thought, “self, there must be some calculus that could help me solve this problem”. So I did the geekiest thing I’ve ever done in my life… I built a “Christmas Light Calculator“. It’s based on Ken Muldrew’s Christmas Tree Calculator. Is the math correct? I don’t know, but 83.5156′ of lights sure seems like a lot!

[youtube]http://www.youtube.com/watch?v=4AQi9x_Ueho[/youtube]
M returned from Philly this weekend with a 15lb CO2 tank. We hooked it up to the regulator, hose (with ball lock), and “carbonator” cap that I got from Northern Brewer and it worked great. From construction to carbonation took about 10 minutes. Video is here.

The set up is basically the same as this one. I set the regulator to 40psi, but I’ll experiment with other settings.

The steps are this: take a 3/4 full bottle of chilled liquid, attach the ball-lock cap, evacuate the air, connect to the hose, apply pressure, shake like mad, drink.

In this case I carbonated water and pomegranate juice. It’s really tasty and quite cost effective ($.01 for the water, $.02 for the CO2, and $2.50 for 1/2 liter of Georgian pomegranate juice that I get across the street). We plan to experiment with other juices and kefir d’acqua that M makes.

Update: I used way too much pomegranate in my first experiment. Subsequently I tried it with just a couple of ounces of juice and it’s much better.

I modified amfr’s short url scripts to roll my own tinyURL. I added a random name generator for when I’m lazy, but I also like that I can make my own target name. For an example, see http://url.beeby.org/misha/ I was listening to a podcast of Science Friday the other day (yes, I am a nerd), and Michael Pollan was on talking about his new book In Defense of Food. He actually came across as a reasonable fellow in the interview — all of the other press I’d heard about the book made him sound like a very unreasonable, local-only-organic-granola freak. During the show a whacko caller mentioned something called “Bieler’s Broth“, which I vowed to try next time I was feeling under the weather. Well, today is the day.  I made a slight variation on the recipe linked above:

Bring the water and salt to a boil and steam the beans for 5 minutes. Chop the celery and zucchini and add to the pot. Cook for an additional 5 minutes (or until all of the vegetables are tender). Pour into a food processor and puree. Add the parsley and olive oil. Puree the hell out of it.

The result isn’t the best tasting recipe in the world, but it’s a lovely green color when it’s done and I get the feeling that it’ll do great things for me. The consistency isn’t what I would call “pea soup” because the parsley is still rather crunchy.  Try at your own risk. There wasn’t much I could do with Audrey in my network “closet”, so I retired the old girl this weekend. I figure that I’ve gotten my seventy dollar’s worth in the four years I’ve owned it, so it doesn’t hurt too bad.

In its place, I installed a 2001 vintage IBM ThinkPad Transnote. The last time I tried to start this ill-fated piece of technology was over a year ago and it wouldn’t boot. It seems that a deep battery run-down solved its OS problems; this time Windows 2000 started without a hitch.

I knew I’d never be able to wall-mount this goose-necked, touch-screen marvel unless I were able to take off the portfolio cover and paper pad assembly. There are a number of screw covers and tiny screws around the periphery of the case, which I removed. The faux-leather binder and paper pad came off easily. After disconnecting the notepad cable, I connected the battery, plugged it in, and crossed my fingers. The stand-alone tablet booted without a hitch. I was able to use Audrey’s mounting hardware (a $1.29 set of “heavy duty” mirror mounting brackets) to attach the ThinkPad to the wall.

The battery life isn’t great, but I can take it down anytime I need a wireless Windows machine (to test a Web site in IE6 or whatever). Additionally, I loaded it up with free software (Gimp, iTunes, OpenOffice, Arachnophelia, etc), so it’s actually a pretty competent little bugger. And jeer all you want, but at just over 3/4″, this thing is as thin as a Macbook Air. This may be a dumb post for anyone who’s ever cooked before, but it’s amazing how simple, cheap, healthy, and tasty homemade lunchmeat is! M got a turkey breast at the co-op on Tuesday, which I roasted today with a bouquet of thyme and a slab of butter. After two hours baking and an hour resting, I sliced half of it for sandwiches (pictured here). It’s an easy week’s-worth of sandwich fixings for about 1/3 of the cost of those watery, nitrate-packed deli counter meats.