John F and I went out and got a pet fish today during lunch. We’d wanted to get one for a while, but with the holidays approaching, the end of 2007 was not the time. Our knowledge about domesticated fish was increased exponentially after just two minutes with the pet store’s kindly fish-man (an actual man, not some creepy half-man, half-fish hybrid). Did you know that a fish can live in a bag for two hours? Did you know that beta fish and goldfish are the only fishes that can live in a simple (unfiltered, unheated) fishbowl? Did you know that a fish costs $1.99? Last year when M and I closed up the cottage in Bellaire, we thought the weather was good… ha! What did we know? This unseasonable heat wave was on in northern Michigan too. The thermometer clocked out at 85 one day. The swimming in Torch Lake was even balmier than in July! It was a very blustery day on the beach today. Winds were in excess of 20 mph and the sand was whipping across the tundra that is Riis Park. This is a picture of me checking whether beachside is less (or in this case) more) windy.

M and I went out to the “Honorable William Wall” clubhouse last night. The floating bar/barge is great. We got there early so it was quiet, but it quickly filled up. There was a regatta from the Manhattan Sailing School (with the skyline in the background) and a beautiful sunset. Highly recommended. A launch leaves from the west side every half hour after 5:15. M and her dad C, his gal M, and I went to the Tenement Museum on Saturday. I highly recommend visiting the museum. In the “Getting By” tour we saw two apartments (one from the 1870s and another from the 1920s). So much has changed in the past century, but so much has stayed the same too. Our very young guide seemed like she’d rather be on the beach than asking rhetorical questions to tourists, but despite this it was a worthwhile trip. 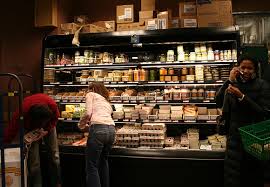 M and I joined the Park Slope Food Coop tonight. They offered Kool-Aid (organic), but we didn’t drink it. The admonition-laced orientation session lends a lot credence to many of the horror stories about the Coop. Quotes from M’s email to V about the commune will follow shortly. I’ve gotten hundreds, nay thousands, of emails demanding an update about the lawn. As you can see from today’s photo, the grass is doing quite well. There are at least three tomatoes on the vine (a bumper crop).

Adeline Beeby (my great grandpa’s sister?) wrote the following note accompanying some old tools and an essay that she had written for an English class as a youth. The type-written note is dated 1946 and reads:

THESE TOOLS DATE BACK BEYOND MY MEMORY. IN FACT THE HAMMER BELONGED TO GRANDFATHER BEEBY WHO BROUGHT IT FROM ENGLAND. HE WAS BORN IN CUMBERLAND COUNTY, ENGLAND IN 1805 AND CAME TO THE UNITED STATES WHEN HE WAS 17 YEARS OLD. THE MALLET AND THE HUSING PEG ARE HOME MADE. THESE WERE ALWAYS USED ON THE FARM. THERE IS ALSO AN AX. THE HANDLE IS BROKEN, BUT I USE IT OFTEN (NOT FOR CUTTING). I WILL PUT A THESIS I WROTE FOR AN ENGLISH COURSE ABOUT 1930 WITH THESE TOOLS. IT IS ABOUT THIS OLD HAMMER

Adeline got an A on the following paper, which is entitled “Reflections of a Hammer”:

[Teacher’s note:] I enjoyed this account greatly. Antiques that belong to one’s family mean much to me. I am correcting your papers from an old desk that belonged to my great grandfather. I hope that your old hammer always will remain in the Beebe family. Florence Eckert. The Urban Arborist came in today and took out part of the maple in the back yard. It was getting really gloomy back there and I think the shade has contributed to the steady decline of the grass. It took three guys four hours to setup, cut, clear and chip what appears to be about half the tree. It’s already noticeably brighter and the air circulation is better. Lawn update! It’s one step forward and two steps back with the lawn this summer. It was doing well and then we had a couple of big events so the lawn got totally trampled. Add all the shade we get from the tree and it doesn’t stand a chance. We’ve got an arborist coming in to thin the tree a little so hopefully that will help. I planted new seed today. Keep your fingers crossed.